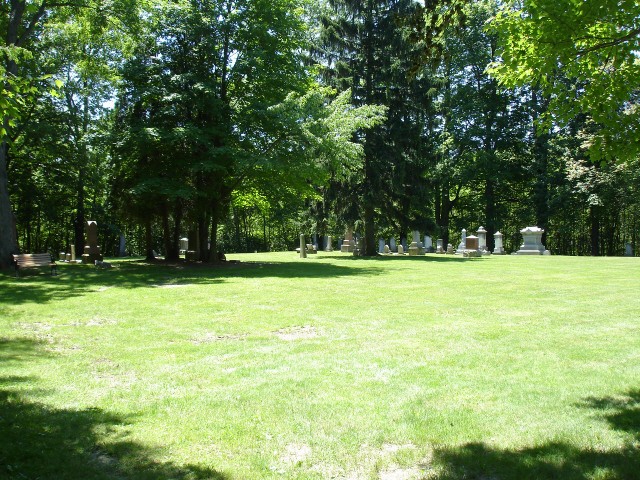 According to his tombstone, John Crow originally settled in Litchfield in June of 1832 but Medina County Land Records show he purchased 175.44 acres from the State of Connecticut occurring on August 24, 1831 (Volume F, page 359). A number of other settlers – many from Hampden County, Massachusetts like Crow – eventually entered upon the northwest region of the township. Appropriately so, it was the name “Crow Corners” by which this area came to be known. Burials can be found here for Handysides, Halladays, Scovilles, and others in addition to members of the Crow family. This cemetery seems to have always been a public cemetery although the first known burial here wasn’t until 1850 when Rufus Burr died on February 11th. A few days later, one year old Ellen Handyside passed away on February 17th. At least nine burials were made here before the first known member of the Crow family – John’s granddaughter Vienna – was laid to rest here in the summer of 1856.

The parcel containing the cemetery remained in the Crow family until it was sold to P.L. Blaine on April 2, 1909 as recorded in Volume 82, page 354 of Medina County Land Records. While the cemetery was not formally deeded to anyone, it is here that we see it exempted from the sale:

“….excepting therefrom about one acre of ground used as a burial ground and the driveway thereto.”

At some point the township took over maintenance of the cemetery. John Hoffman was named sexton of the cemetery in 1918 and told to plat the cemetery, divide it into numbered burial lots, as well as erect a fence around the property.*

The grounds are about 175 feet by 175 feet square and surrounded by woods on three sides which descend down into a valley. Access can be had by the driveway which is guarded by a large gate towards the road.

The cemetery has never been a primary place for burials, especially since most of those pioneer families are long gone, but interments are still made there occasionally.

The south half of the cemetery is the oldest part and no original records exist for that section of the cemetery. Using the remaining lot markers and evidence on site, it appears that this section was laid out in ten rows of lots. Each row is composed of four lots. A lane divides the rows into halves; with two lots being on each side of this lane. Lots are about sixteen feet wide by nine feet long and are probably set up for five gravesites.

Any numbering system in use was lost years ago. With no original records to work from, and using the above-described layout, the lots were numbered to assist in organizing the records for this guide. Starting on the east side with the first row, the lots in each row have been numbered from south to north. A walkoff of the old section was done and the burials were assigned to these lots using the headstones as a point of reference. Without actual burial records to consult, these lot assignments must all be considered educated guesses.

The earliest known burial in the northern part of the cemetery was made in 1943. This newer area of the grounds was laid out as four rows of four lots. Most of the lots contain four gravesites although the northernmost lot in three of the rows only has room for two.

Lots are numbered starting with number 274 on the north end of Row 4 and going south to the end of each row. Numbering then starts again at the north end of the next row and this pattern continues with each row as you move west (except Lot 297). Where lots are split, the south half is labeled “A” and the north half is labeled “B”. Gravesites in these halves are then labeled either N (north) or S (south). Records for this section consist of a map showing the lots with names written in to indicate burials and lot ownership. Township records viewed were current as of May 2011.

There is room for more gravesites in the north area of this cemetery but that area is currently not platted out for use.

The WPA map for this cemetery adds little to the cemetery record. It shows nine full rows, each composed of fifty-five gravesites with no indication of burial lots. It shows the graves as being plotted all the way across the span of the cemetery and, while this is ultimately possible, it was not in use as indicated. The map also has the graves for the veterans plotted incorrectly. A tenth row, with a lone single grave, is also shown. This is almost certainly based on a footstone found there which goes with the Crows.