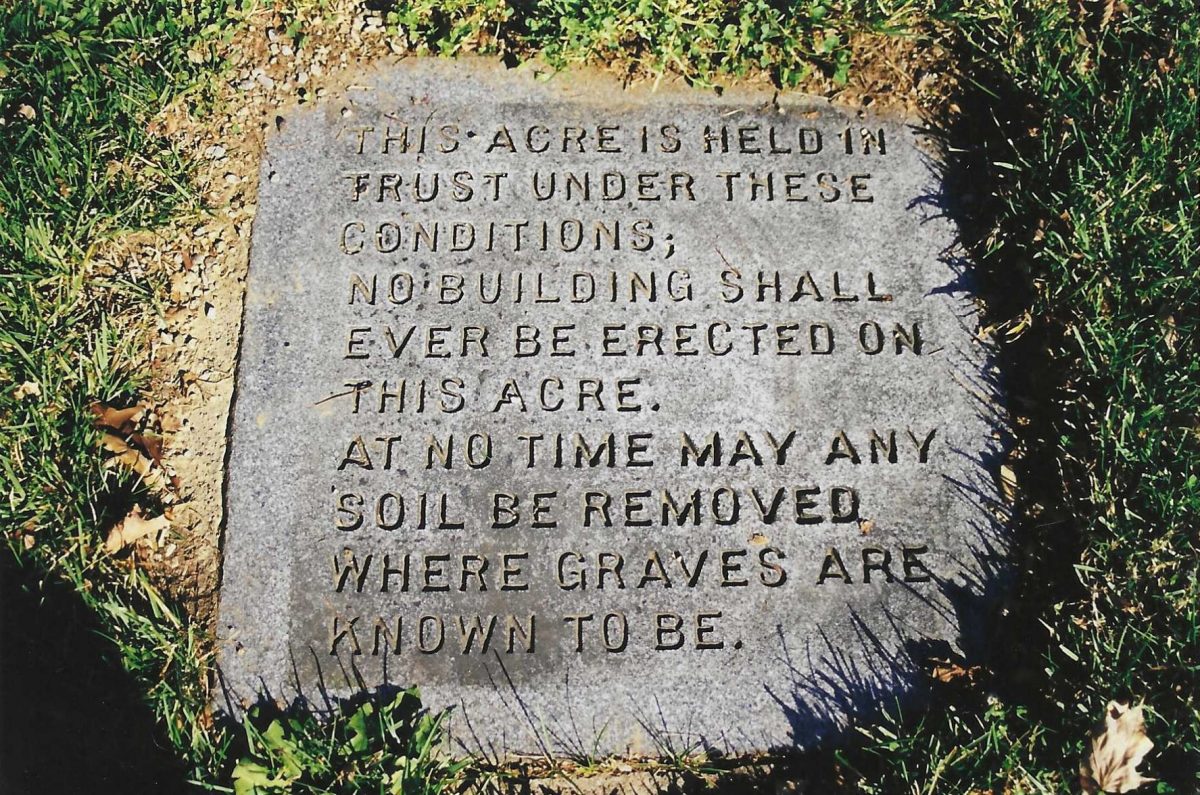 Situated in the Township of Liverpool, County of Medina and State of Ohio, and bounded and described as follows:

Containing about one acre of land and being situated in Section 24 and Lot No. 2 in said Township and County and bounded on the north, east and south by premises of The Evangelical Lutheran Zions Church, named aforesaid, and on the west by the public highway known as County Road No. 47, said property being known as the “Old Catholic Cemetery”.

TO HAVE AND TO HOLD said premises with the appurtenances thereunto belonging to said Grantees, their Assigns and Successors in Trust for the Evangelical Lutheran Zions Church in Liverpool Township, Medina County, Ohio, forever, but only for the uses and purposes and upon the trusts following, to-wit:

II. That no more than two feet of soil (in depth) shall be disturbed or removed from where graves are known to be. All other parts of property shall be exempt from this provision.

IV. A suitable monument of granite shall be erected on said property by the Grantees herein, said monument to be of such size and quality as shall meet the approval of the Pastor of the said Saint Martin’s Church, and said monument shall be inscribed with the general provisions of this Deed of Trust. Said monument is to be located at such a point that the radius of a given number of feet shall embrace all known graves.

V. The gravestone on the grave of George Weber shall be laid in concrete over the said George Weber’s grave.

VI. The entire cost of the improvement of said property aforesaid, including the monument and inscription and expense of this Deed of Trust shall be paid for by the Grantees herein.

It is a condition of this Deed of Trust that the Grantees herein, and their successors in the said trust, be possessed of said property and of the title of the Grantor thereto only for the aforesaid purposes, and that upon violation of any of the provisions of this Deed of Trust, or upon failure to perform any of the provisions and conditions aforesaid, in whole or in part, at the option of the Grantor herein, or of his successor, as Bishop of the Diocese of Cleveland, Ohio, (notice of such option being hereby expressly waived), this instrument shall be and become null and void and of no effect or force in law or equity, and the said premises shall, upon the exercise of said option, immediately revert to the Grantor herein, or to his successor, as Bishop of the Diocese of Cleveland.

IN WITNESS THEREOF the said Joseph Schrembs, Bishop of Cleveland, Ohio, has hereunto set his hand this 9th day of November, A.D. 1926.